An Environmental Impact Assessment Scoping application has been submitted for a 250 to 300 flat scheme at 154-172 Powis Street and 125-129 Woolwich High Street in Woolwich. The plans also will create 1000 sqm commercial floorspace.

The 0.39 hectare site is bound by Woolwich High Street, Powis Street and Mortgramit Square. To the West is the Gala Bingo and to the East is the Co-Op Building, neither of which are within the application site. The buildings on site vary from small retail units facing Powis Street, of various ages and conditions, to backlands MOT testing facilities and car wash facilities. Overall there is little of architectural interest in the site, unlike surrounding buildings.

JLL is acting as agent for the application, and the developer is United Living (South) Woolwich Ltd, which appears to be linked to the United Living construction firm who have developed several London projects.

The scheme will involve four buildings of between four and 24 storeys being constructed on the site, the largest of these will be in the centre of the site while Powis Street will be fronted by a part four, part five storey building.

While thus far towers have not been constructed in this part of Woolwich, the site is situated close to the large Royal Arsenal development which plans towers just at the other side of Woolwich High Street. 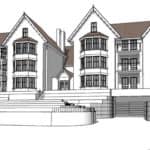 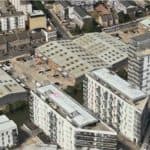