Darling Associates Architects have drawn up plans for a 15 storey building on the site of a former Applegreen Petrol Station in Kennington, South London. The proposed scheme, just submitted as a planning application to Lambeth Council, will contain 116 apartments if approved.

Developer DPK PFS Investments Ltd have commissioned the scheme, utilising Quod as their planning agents. Lambeth have a targeted 27th August expiry date to make a decision by, which given the scheme prominence will most likely be made at a planning committee.

The site sits just across Kennington Lane from the Tesco Superstore which is currently being redeveloped as part of the larger Oval Gasholders scheme from Berkeley Homes. This scheme includes slightly taller elements than is proposed on the petrol station site, however the block immediately opposite is shorter than the proposed scheme. Given the accessible and central location, no car parking is proposed.

The planning application breaks the 116 apartments down into 85 private and 31 intermediate homes, with 73 of the private flats being one bed apartments and the remainder having two beds. The intermediate housing is more evenly spread between one, two and three bed units.

A brick facade is proposed with set-back balconies with metal balustrades, as well as roof terraces. Splashes of green terracotta tiling are present on some of the floor plates, as well as surrounding the ground floor entrance, while most floor plate articulation is with textured reconstituted stone. 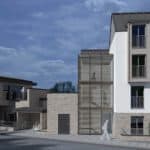 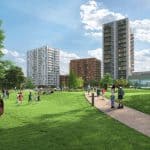