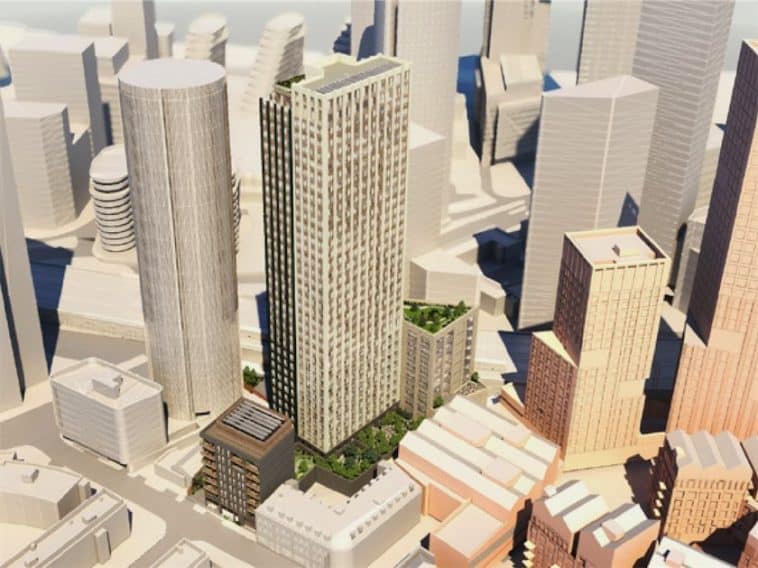 Grand South Ltd have submitted plans for a 36 storey tower at 12-20 Wyvil Road in Vauxhall. The scheme will contain 272 apartments, alongside office and retail space. The proposals replace a consented scheme for a slightly taller – 37 storey – tower with fewer, 219, flats.

The new scheme is made up of three buildings, the tallest being a 36 storey tower in the centre of the site with 249 flats and two retail units. There will also be a 10 storey building, near the railway tracks, providing office space – significantly more than in the previous application, and an eight -storey, 23 flat building fronting Wyvil Road.

21% of the flats will be affordable housing, which is slightly up from the previous 20%, but significantly up in terms of the number of units given the number of flats in the scheme has expanded. In total 23 will be for affordable rent, provided in the Wyvil Road building, and 35 will be for intermediate tenure. An alternative offer to provide financing for more units off site has also been made.

The design has changed significantly from the previously consented scheme, adopting a design that fits more closely with the New London Vernacular descriptor – with a brick warehouse feel. Stiff + Trevillion have drawn up the new designs, replacing Stephen Davy Peter Smith who were behind the previous project.

Perhaps the most unusual feature of the new design is the two-tone appearance, with half of the tower clad in a different colour. The materials behind these will be glazed tiles. This helps breaks up the bulk of the tower, and differentiates the scheme from nearby Keybridge which utilises brick cladding.