Plans have been lodged with Camden Council by The Prosperity Group for a four storey, nine flat development just south of 35 York Way, replacing a site of lock up garages.

An application was previously submitted for seven flats, although thanks to a slight enlargement of the plot this has now been increased to nine. These will be two one bed flats, two two bed flats, four three bed flats and one four bed apartment.

The design, from Box Architects, matches the height of the existing terrace of houses along York Way, but thanks to a slope in the road is able to support four storeys rather than three. 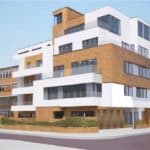 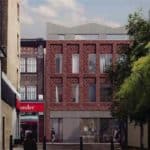