Plans have been submitted to convert New Horizons Court buildings 1 to 4 from offices into 268 flats. New Horizons Court is located on Shield Drive just off the Great West Road near Syon Park station between Isleworth and Brentford.

The plans propose converting the four office buildings closest to the Great West Road of the total of six in the office development. Across the four buildings there will be 93 studios, 129 one bed flat and 46 two bed flats, if plans are approved. Hounslow Council have very limited scope for objection under permitted development rules, limited to transport, flooding and similar dangers or if the previous use was not as claimed.

The area of the site is large – 1.5 hectares – and the current buildings are quite substantial post-modern office blocks. Among the current and former tenants is Sky television.The plans, submitted by Sackville UKPEC4 Brentford (GP) Ltd will see some of the flats only face onto a small internal courtyard, although the majority will have views of the outside.

Flat sizes are somewhat small, but not as small as many permitted development schemes. One one floor plan, drawn up by Spratley Studios, studios range from 29 to 39sqm, one beds from 40sqm to 54sqm and two bed flats from 55 to 66sqm. Permitted Development means that standard room size regulations do not have to be followed. 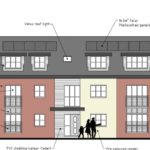 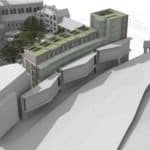