E&E Enterprises have submitted plans for a block of 24 flats on a backlands site in North Croydon.

The site is located behind existing properties on Campbell Road, which is located just off the London Road near Croydon University Hospital. It is accessed by a driveway behind an existing block of red brick flats that appear to be from the post-war era, although much of the road consists of Victorian Villas.

The proposed scheme, designed by Affordable Architects of Leatherhead, consists of four interlinked blocks, two in green and two in brown. 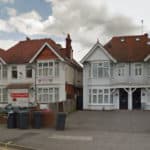 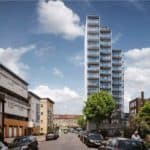