Plans have been lodged with Richmond Council to replace an existing car showroom at 45-49 Station Road in Hampton with a new showroom alongside six houses. Station Road, Hampton was also the site of another recent residential application which Apartology covered, at 139 Station Road.

The application was originally submitted to Richmond Council in October 2015, however, it has only just been validated due to problems with the initial submission.

The existing showroom is operated by G Kingsbury & Sons, who are the applicant. The designs for the new showroom and houses have been drawn up by Clive Chapman Architects.

The new showroom will have an appearance similar to the neighbouring terraced houses, with a traditional roof over the two storey building with offices on the top floor. In the original submission, there were to be flats here, however, this was modified before the application was validated. The houses will be located behind the new showroom – four in the middle of the site in a small crescent shaped terrace, and two semi-detached dwellings fronting onto Thames Street. 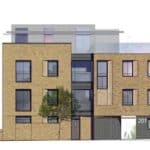 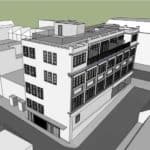