Hollybrook Homes, along with National Grid, have submitted plans for a 150 dwelling scheme in the West of Romford. The development will include a mixture of houses and flats in a scheme drawn up by ATP Architects.

The majority of the units will be flats, with 93 two bedroom apartments and 18 one bed flats, with a further 22 three bedroom flats. The houses will all be four bedroomed, and there will be seventeen of these in total. 16 of the flats are planned to be for intermediate tenure, with the rest being for the open market – either for sale or for private rent.

The site, on the western side of Sandgate Close and also fronting Crow Lane, was a former National Grid site but has been vacant for a number of years. On one side this back onto an existing road of terraced housing, and on the other a Royal Mail facility.

The planned houses will sit on the side of the site fronting the back gardens of existing houses, while the flats will be located in five  blocks located on the Northern, Eastern and Southern perimeters of the site.

The proposed design uses various shades of brick for both the apartment blocks and the houses. The houses are in short terraces with accommodation in the open-gable roof. The flatted blocks appear quite low rise with many at only four storeys, and it feels as if the developer could have pushed for a larger scheme, perhaps with a mansard roof providing an additional storey across the site rather than in just selected places. 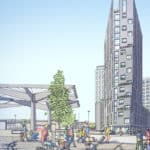 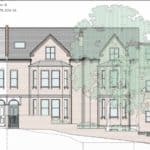